No one aboard the ship survived
Except the mad captain
Who lived to tell tales of his own heroics
Though nobody ever believed him
at July 23, 2020 No comments:

Opinion - Donald Trump Is The Plague 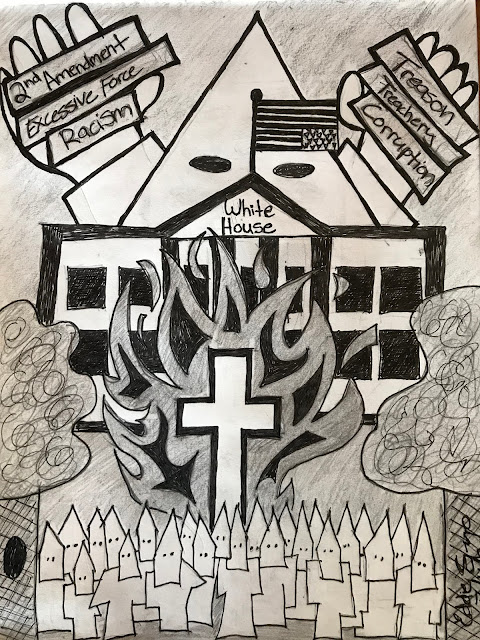 I didn't want to write this.  I initially dreaded it.  But I ended up enjoying it in much the same way I enjoy taking a shit.  It had to be done, and I felt a great sense of relief while doing it.  It's as if the news about Trump had me backed up for more than three years, and today I had to drop a massive political deuce.

I personally believe that an eight year Trump Presidency will set the U.S. back for decades in healthcare, education, infrastructure, election and judicial fairness, criminal justice reform, domestic relations, foreign relations and everything else that matters to a strong democracy.  Four years has been devastating.  Mistrust for the government is at all time high from both sides of the political fence.  Things aren't getting better, they're getting worse and they are going to continue to get worse until we get a new President.  Eight years would be an unmitigated disaster that I believe will set the U.S. back for decades.  The damage will be categorical and sweeping.

I got so sick of hearing about Trump that I was started trying to avoid political news like the plague.  How ironic that there is now an actual plague happening, and it is being made worse by political news made by Donald Trump.  Covid has been exacerbated by Donald Trump to the point that you could almost say that he, himself, is the plague for 1) not wearing a mask, and 2) not listening to Fauci and the other doctors (who've been studying viruses for 30+ years) about Covid response.

But Covid response is only one of the long list of grievances against Trump.  This only a partial list, and these are only the ones I could come up with off the top off my head.  These are only the things he's done since being President.  You be the judge.


Again, this isn't a complete list.  This is just off the top of my head.  I may have to keep adding to it, but I hope to God not for long.  Tell everyone you know to vote for Joe Biden this November.  It's literally a matter of all of our health and safety.

This is no game.  We need a new President, and it's urgent.