Into The Wild: The Difference Between Heroes And Phonies

There is only one thing that separates Chris McCandless' story from that of every other hobo, drifter and bum who's ever picked up a Jack Kerouac novel: self-belief.  Chris McCandless really, truly believed in himself.  And it wasn't run-of-the-mill self-belief that everyone who's ever graduated college and got a 9 to 5 job has.  He was on a whole different level.  He had the level of self-belief you would expect Prince, Tom Brady or Brad Pitt to have.  Only people who broke through to the very top of their game.

People are obsessed with Chris' story because he broke through to that level, but it didn't look the way people thought it would.  He was a true artist, philosopher and liver of life, and this is what success looked like to him.  In other words, Chris McCandless made it.  He was wildly successful.  He lived out his most epic fantasy, and had he survived, he would have written the next great American novel and been immortalized in the cannon next to Henry David Thoreau and Mark Twain.  He still was immortalized, but he didn't get to write the novel because he was dead.  John Krakauer had to write it for him.

The hobos, drifters and bums he's compared to are nothing like him.  They are the polar opposite of him.  Those people run away from their lives out of weakness and fear.  They run into the wilderness to hide, so they don't have to face their truth.  Chris McCandless wasn't running away from his life.  He was running towards it.  This was an act of standing up and claiming what was his.  He was staring his truth down and making it his bitch.

If there was any flaw in his thinking, it was only selfishness.  He was angry with his family at the time, and I think it's possible he didn't fully realize the magnitude and extent of the pain that his loss would cause them.  I think if he did, he might have at least brought a map or an ax. 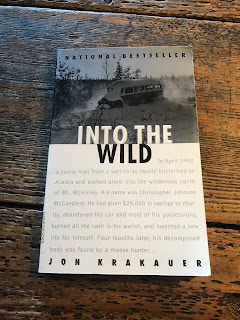