The Naked And The Powerful

Last night my friend told me that people sometimes talk about me behind my back.  This is a familiar conversation.  I've had it before with other people.  The nature of the conversation was as follows:

Friend: "Sometimes people say things to me about you."

Friend: "But it is my problem, because I defend you."

Those weren't the exact words of the conversation, but that was the essence of it.  As much as I appreciate my friend defending me, he didn't have to.  I don't feel the need to defend myself from people who say things about me behind my back.  The reason I don't need to defend myself from them is because I know I already have power over them.  I know that I already have power over them because they haven't said a word about it to my face.

If you can't speak your truth to someone, then they have power over you.  So keep talking shit behind my back, minions.  You're giving me power over all you, and I love having power - especially over weaklings, liars and cowards.  You can keep talking shit and I will keep telling the truth to everyone, standing naked and beautiful for all the world to see. 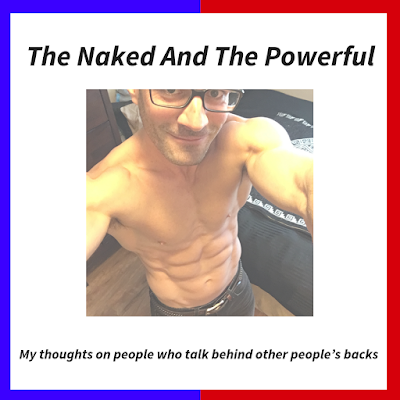