Average Joe is the average American. He works a desk job at a company he doesn't own, which means he is already losing. He knows he's losing, too, which is why he hates Congress like he hates AIDS.

No matter how hard Joe works, he barely gets by. He has enough to pay his bills each month and maybe he'll get to go on a small vacation this year, but nothing more. He got a small raise last year, but then his rent went up, so the landlord pocketed that money. Joe feels stuck and frustrated and confused. He knows he's being fucked, but he doesn't know how.

It turns out that Joe is right, he is being fucked - and the reason he doesn't know how is because the fucking took place hundreds of miles away in Washington D.C. Joe was fucked when Joe's boss' boss' boss, Donnie Billionaire, paid off a Senator to put Donnie's interests ahead of Joe's.

The Senator was happy to oblige, even though there are millions more Joes than there are Donnies, because all the Senator cares about is getting re-elected and the Senator knows it's money that wins elections, not votes. So the Senator doesn't give a fuck what Average Joe thinks as long as he gets the money from Donnie Billionaire.

At their meeting, the Senator reassures Donnie that he is almost sure to win because he spent his entire past term gerrymandering the voting districts and raising money for his next campaign instead of fixing the roads, schools and healthcare system.

With the roads, schools and healthcare systems in disrepair, the Joes are pissed - and they should be. They're broke, their roads are shitty and overcrowded, and they can't afford school or healthcare. They're calling for the Senator's head. So what does the Senator do? Easy solution - blame the other party!

The Senator has been using this tried and true method for years. "It was those fucking Yellows!" he hollers into a crowd of Purples, making no mention of his meetings with Donnie or the payments he received. Joe hears this and he's more pissed off than ever, except now he's pissed off at the other Joes (the yellow ones) because he thinks it's their fault. He thinks it's their fault because the Senator lied, and the Senator keeps lying and lying and blaming the other Joes until the Joes hate each other so much that they've forgotten all about Donnie.

The Joe's don't know who Donnie is, yet Donnie controls their whole life. He tells them when they have to show up to work and when they can go home to their family. He even tells them when they can eat and shit. Yet the Joe's have never met Donnie and don't have access to him. That's because Donnie doesn’t want to be accessed by Joes. He wants to control their lives silently and invisibly without them knowing. The less they know, the better. If the Joes knew what Donnie was doing, they would strip him of everything, take all his money, tar and feather him and drag him down Broadway by his pathetic little pecker - and Donnie knows that.

Donnie controls Joe's whole life, and he doesn't even like Joe. In all likelihood, he hates Joe. He thinks he's better than Joe and that Joe will never be as good as him. 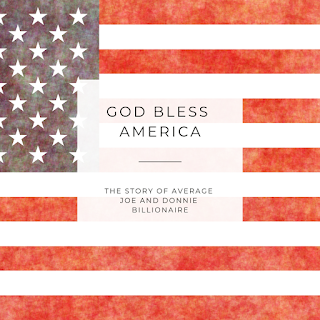