Fuck You Too: How To Break The Never Ending Cycle Of Abuse

The cycle of abuse entered my life recently in an unexpected way.  I am caring for my friend's dog, who used to be a street dog.  Some person or people abused him, and now he does not trust people.  The dog keeps trying to bite me every time I try to walk him.  If he does it again, I will stop trying to walk him for my safety and for his.

This is a sad situation.  The dog needs to be fed and watered and walked, and I am trying to help him, but he won't let me help him because he won't let me close to him.  He won't let me close to him because other people abused him.  People, and dogs, who are bullied have a hard time distinguishing who is trying to love them and who is trying to hurt them.  This distinction becomes even more confusing when the bully is a family member, or a person you love.  When you are bullied by a parent, it's nearly impossible to reconcile your feelings.  Anyone who has had that experience, knows it.  People who have bullies for parents almost always turn out to be pieces of shit, just like their parents.  It takes a Herculean effort to break the cycle of abuse.  For people who have been abused, they want to break the cycle more than anything in the world, but can never seem to break through.  It's absolutely maddening, and most people give up.

The worst part about bullying is it can take place in very subtle ways; almost invisible.  Always lurking right below the surface, but never popping it's head up to get clubbed.  Bullies thrive on secrecy, closed mouths and closed doors.

A lot of abusive assholes don't even realize they are abusive assholes.  They're masters at deceiving themselves and others.  The most common type of bully I see today is the guy who gets beaten down all day at work, then comes home and takes it out on his family.  He is angry because he hates his job and his place in the world, and he resents his family because he tells himself he's doing it for them.  That is a lie.  He is not doing it for them.  His family would be happier if he quit his shitty job, moved into a smaller place, and started treating them with some respect.  But he doesn't care about his family's happiness.  He cares about what other people think of him.  He cares more about what his neighbors, coworkers and the other parents on the soccer team think of him than he cares what his own family thinks of him.  That is a huge mistake.  His priorities are backwards.  His family will hate him for it, and they should, because he's an egotistical prick.

You can't keep abusive people in your life.  Even if it's one of your parents.  They're like my friend's angry dog who keeps trying to bite.  If you hang around long enough, you'll get bit, and it will be your own fault.  The only way to deal with people, or dogs, like that is to leave them alone.  Let them sit by themselves until they get so lonely that they have to change - or they don't.  Most people never change, and most bullies die alone, except for the people who mistakenly think they need the bully (when in reality they don't).  The only power a bully has over a victim is that the victim thinks they need the bully.  They don't.  Even when the bully is your Dad or your Mom or your brother or you lover.  You don't need that cunt.  You don't need anyone.

I believe you do need other people to live a happy and fulfilling life.  Happiness isn't real unless it's shared.  But you don't need any specific person, or any specific group of people.  If there's a group of people bullying you, fuck all of them.  You don't need any of them.  You can always find new people who will treat you right.  Always.  The secret is to pay attention to how people make you feel.  People who make you feel good deserve your attention.  People who don't make you feel good deserve to be removed from your life as soon as possible.  Delete, block, goodbye.  Even if it's your parents.  Only the people who support you are worth your attention.  Focusing your life and your energy on those people is the only way to break the cycle of abuse and anger.  Find people who you love, and who love you the right way, and stay with them. 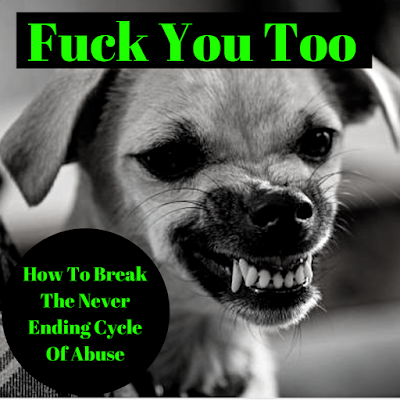